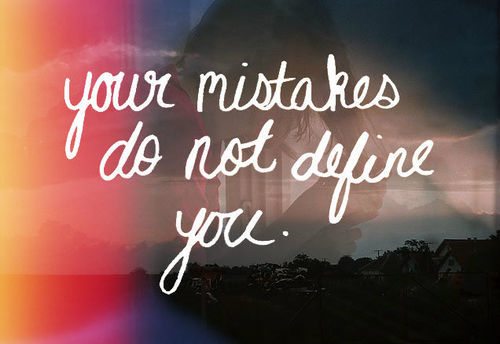 Your Mistakes Don’t Define You

As hard as it is to recognise failure and stare it directly in the face, it is important to remember that failure does not define you. Just because you have failed at a specific task does not make you a failure in any way.
Have a look at some of these articles below which give some great advice on how to not let failure define you.

Elayne Savage: Don’t take it personally | queenofrejection.com
Your failures don’t define you. Your response does | MargieWarrell.com
Don’t let Failure Define You | ProfessionalYou.com
Quotes on Failure | notablequotes.com
How to Bounce Back from Failure | dailygood.org
You are Not a Failure | PsychologyToday.com
Keep Moving Forward and Let Go of Failure | AdvancedLifeSkills.com

2. Learn From Your Mistakes 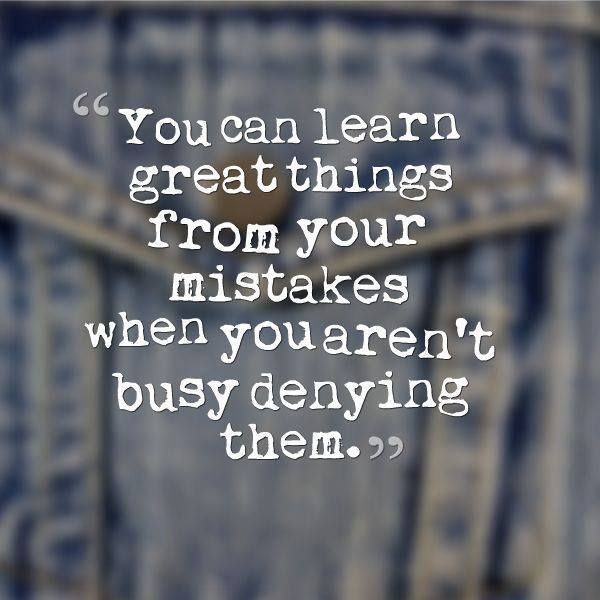 One of the greatest ways you can defeat your failure is to learn from your mistakes. By turning your failure into a learning experience you are automatically taking a negative situation and turning it into something positive and most importantly, you are picking up on things that you can do in the future to help that same failure from not occurring again.
Have a look below at some key things you can do to help yourself learn from your mistakes like asking yourself what went wrong and knowing what caused the mistake to occur in the first place. I have also added in some inspiring quotes to motivate you to learn from these mistakes.

3.  Accept That You Have Failed and Move On

Moving on After Failure | Luke1428.com
6 Tips for Accepting Failure and Moving On | Entrpreneur.com
The Deep Importance of Learning to Accept Failure | hellogiggles.com
12 Truths to Tell Yourself After a Failure | marcandangel.com
How Failure can Accelerate Your Success | pickthebrain.com
Moving Forward After a Career Failure | themuse.com 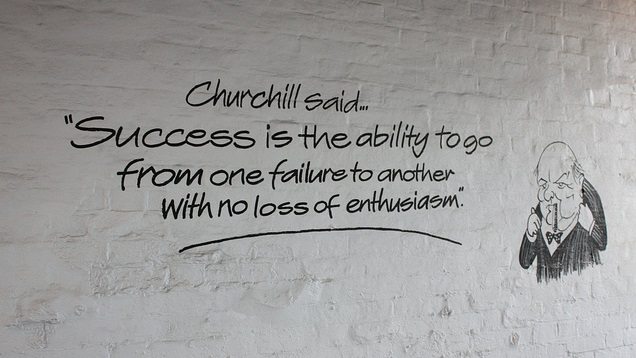 Failure is undoubtedly one of the most demotivating life experiences that a person can go through. One of the best ways to overcome this feeling of failure is to continue to stay motivated by channeling your energy into another project. It is important to shift your focus away from the failure onto something positive, like working towards achieving a goal that you had previously set for yourself.

5. Read Books on Dealing With Failure

Failure is inevitable. Therefore, it is important to make sure that you are fully prepared to deal with it when it arrives. One of the most effective ways to make sure you are fully ready and capable to deal with failure is to constantly read books on the subject. I have listed below what we think to be 7 of the best books on dealing with failure, so go give them read and prepare yourself to adopt a whole new perspective on the topic!

6. Watch Ted Talks That Focus on Dealing With Failure

The only thing better than being inspired by a great book is being inspired by a great TED talk.
I’m sure you are well aware of the TED talk phenomenon and the inspiring difference that they are making in the lives of so many people, and therefore it just wouldn’t be right if I left them out of our article.
So listed below you will find a collection of the best TED talks that focus on dealing with failure. Do yourself a favour and set aside a few minutes every day to give these a watch.

Kathryn Schulz: On Being Wrong
Larry Smith: Why You Will Fail to Have a Great Career
Sarah Lewis: Embrace the Near Win
Elizabeth Gilbert: Success, Failure and the Drive to Keep Creating
Tim Harfard: Trial, error and the God complex
JK Rowling: The fringe benefits of failure
Diana Laufenberg: How to learn from mistakes?

I hope that you now have a bit more insight into what exactly it takes to deal with failure more effectively. While there is no way to prevent failure from occurring all together, I hope you are feeling more confident in your abilities to be able to deal with failure when it arrives. And remember, you ARE not your failure, make sure to never let it define you!